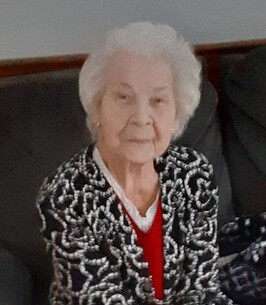 Mary Frances Calo passed away peacefully on Wednesday April 20, 2022 at Brigham and Womens Hospital, after a brief illness and surrounded by her loving Family. She was 96.
Born in Lowell, MA on September 26, 1925, she was the daughter of the late James and Lauretta (Hefferon) Cirillo. Mary grew up in Lowell and graduated from Lowell High School. After high school she attended Mercy Hospital in Springfield and graduated from their school of Nursing in 1947. She started her nursing career at Lowell General Hospital.
After the war, in June of 1947 she married the love of her life the late Anthony “Tony” Calo. Their marriage followed his long dialog trying to convince Mary’s parents he was the right guy for her. They remained happily married until his death, 72 blissful years later.
In 1957, Mary and Tony moved to Medfield to raise their children. During Mary’s 65 years of living in Medfield she spent 25 years working at the Medfield State Hospital as a Registered Nurse.
Mary was also active with the local girl scout and boy scout associations as a group leader while raising her children in Medfield. After caring for her five children, Mary loved becoming a grandmother and it brought her happiness to be an active part of her grandchildren’s daily life.
Mary leaves behind her five children. Mary Ann McCarthy of Franklin, Virginia Calo of Medfield, Joseph A Calo and his wife Gay of Medfield, Linda Stanley and her husband Ron of Millis and Patricia Tuccero and her husband Dante of Foxboro. Cherished sister of James Cirillo and wife Jean of Ossippi, NH and sister-in-law of Anna Dappolonio of W Newbury. She is also survived by 10 grandchildren, 10 great-grandchildren and many loving nieces and nephews. She was predeceased by her husband Anthony Calo, her sisters Irene Sigvardson, Clare Hersee and Jean Creegan and her brother-in-law Joseph Calo, sister-in-law Virginia Cheslawski and grandson Stephen McCarthy.
A Service of Christian burial will be held on Wednesday April 27th 11:30 AM at The Church of the Advent, 25 Pleasant Street , Medfield followed by burial at Vine Lake Cemetery. Visiting hours will be Tuesday 4-7pm at the Roberts-Mitchell Funeral Home in Medfield. In lieu of flowers contributions can be made in Mary’s name to the Medfield Council on Aging, 1 Icehouse Road, Medfield, MA 02052. See www.robertsmitchell.com for the guest book, directions, and additional information. Roberts-Mitchell Funeral Service Medfield